Tate Modern’s ‘Shape of Light: 100 Years of Photography and Abstract Art’, is a comprehensive and ambitious exhibition that examines the ongoing and continually evolving relationship between these two areas. Among the 350 plus works on display (by more than 100 artists) are many iconic images, brought together for the first time with contemporary pieces that explore and often subvert new technologies.

The photographs and mixed media pieces on show are in a variety of sizes and formats; created by some of the most significant practitioners of the last 100 years. Placing them together with various examples of fine art (many from the Tate’s own considerable collection), the curators of ‘Shape of Light’ amply demonstrate how breakthroughs in photography were influenced by related and commensurable developments in painting, sculpture and and other artistic disciplines. In actual fact this went both ways. Photography has had a profound influence on the development of modern art; conceptually and in the process of realising new visual languages and forms. Given the popularity of Tate Britain and its capacity for crowds, most people will need to spend a bit more time and effort in order to absorb the subtleties of these connections. But I’d say that is certainly something worth doing.

From its beginnings, photography has had an intimate (and continually evolving) preoccupation with the abstract. The unintended effects caused by the distortion of lenses and long exposures; the blurs, patterns and darkroom processes, all obscured the distinction between what appeared ‘real’ to the eye and what was contrived. But without getting too bogged down in what constitutes the ‘abstract’ in art (something still debated by artists and historians), suffice to say that ‘Shape of Light’ offers us many different approaches to creating abstract form.

Photography is an all embracing and ambitious medium. It has long been seen as a ‘democratic’ one too; freeing the artist from the requirement of having to draw accurately from nature. After all, this was the reason behind Fox Talbot’s original development of photography in the 1830s.

This exhibition considers ways in which photography (and a great deal of other visual art) has been pushed forward by emergent technology. Seeing potential in new kinds of equipment, photographic material or darkroom process were many talented creative people; who saw in these the means to pursue and develop new directions in their work. Sometimes this involved subverting the original use of a camera or other device. Occasionally this was achieved by exploiting some unseen aspect of a technique. Tate Britain has managed to get a very large number of their results under one roof.

As is common with this kind of large exhibition, ‘Shape of Light’ subdivides the work down into 12 themed galleries; each looking at a different aspect of the main subject and offering explanations. We see photographs by fairly well known individuals like Man Ray, Edward Steichen, Josef Sudek and Brassai; shown together with many others who are perhaps less familiar. Given the sheer number of photographs and other work on show, I’ll mention just a few examples that made a personal impression.

In Room 1: ‘Shape of Light’ are Vortographs by Alvin Langdon Coburn from the early 20th century, that visually echo the contorted and dynamic forms present in Wyndham Lewis’s accompanying 1915 painting ‘Workshop’. Langdon Coburn’s photographs are full of dramatic tension and in many examples, we see intricate patterns that are beautifully recorded and often realised by multiple exposure. Their rich tonal and textural qualities are a consistent feature of his work. 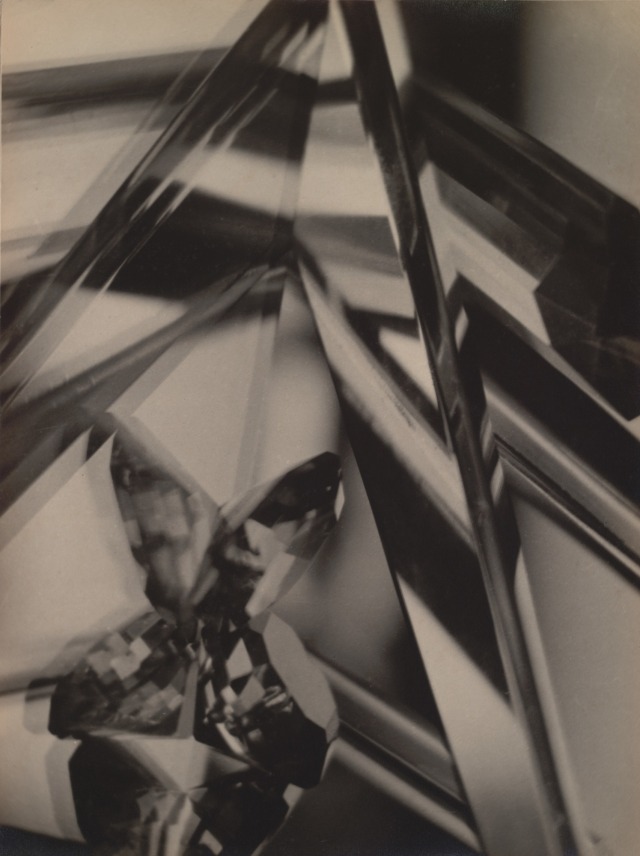 The Vortographs on display contain interlaced angular forms and reflections that appear mechanical in origin. The flatness of these images is also a feature of much Vortacist and Futurist painting. As is the attempt by the artist to evoke a sense of movement on a static surface, with little reference to creating spacial depth, in the way these forms are arranged and recorded. In certain Vortographs, amid the rigid glittering abstract forms, is just the suggestion of the figurative. Perhaps a comment about man and his relationship to the machine or even the city.

Other pictures by Langdon Coburn capture qualities of the urban environment and even suggest the influence of Japanese pictorial traditions. Yet for all their sophisticated elements, his pictures are powerful and have a direct impact on the spectacular. The whole greater than the sum of it’s parts. This applies to his wonderful and insightful portraits too; in which Langdon Coburn wasn’t afraid to distort the likeness of his subject in pursuit of a deeper truth.

Particularly interesting were those who pushed the photographic process. Examples of which get ever more ambitious as the show progresses. In Room 10: ‘Optical Effects’, were Gottfried Jäger’s ‘Pinhole’ Series and Gregorio Vardanega’s ‘Espaces ‘Cromatiques’.

Room 11: ‘Minimalism and Series’ has several works of interest. The Austrian artist Inge Dick, who’s exquisite series of Polaroid prints ‘Black’ was one of the show’s highlights and James Welling’s ‘Untitled’.

‘Luminogram 2’ by Otto Steinert was my favourite picture of the entire show. An image that perfectly illustrates the connection between photography and what was happening in contemporary visual art in 1952. The application of the gestural and spontaneous elements of Action Painting; combined with a knowledge of how to use a camera (and the darkroom), produced an image that is rich and well composed, as well as being especially dynamic.

The final Room 12: ‘Contemporary Abstraction’ contains Anthony Cairn’s ‘E.I. CTY1’. 45 E ink screens in which the digitally recorded image has been arrested and fixed. The results evoking a wide number of associations I won’t spoil for you.

Significant avant-garde figures like Man Ray and Moholy Nagy responded to a century of rapid change. Each had their own artistic vision, which was manifest in whatever medium they chose to work in. What they produced today illustrates the kind of seamless cross fertilisation between photography and other areas of fine art (and beyond into the applied arts), that is the subject of this exhibition.

In conclusion ‘Shape of Light’ certainly didn’t lack scope. The story is well told, set in context and the selection of images good. But the amount of work on show does require a certain degree of focus in order to get the most out of it. As 21st Century spectators, we might view many of these today with a different set of values, but their success as works of art remains undiminished. Also, I doubt many who visit will fail to respond to the beauty of the works themselves.

Finally ‘Shape of Light: 100 Years of Photography and Abstract Art’ runs until 14th October. It is an excellent way to extend one’s understanding of what photography can achieve, as well as being an education in the fascinating and continuing relationship between photography and abstract art.